Divine was only an infant when she was placed in an orphanage. Despite having nothing while growing up, Divine grew up to be an optimistic one. She was friendly, outgoing and had a strong and spontaneous demeanor. On her 18th birthday, the day she got ready to venture out into the world on her own, she was given a ring and a letter by her caretaker. The ring had an engraving of the word Elaina on it and the letter told Divine that she in fact had a younger twin sister. They had been forced to be kept apart but now that she was grown up, she could go and find her long lost sister. Divine set out on her journey and after searching high and low, scanning the crowds of different towns for her sister, she finally found her. On the edge of a town buried in snow, lived a girl in a peaceful little hut. She wouldn't leave the house and when asked about it, she would always say she's waiting for her Divine, having already known about her sister before her. Divine was finally reunited with her sister and it was her need to be loved and have the warmth of her family that always kept her searching and brought the two together. The beauty of the ring owned by Divine has been recaptured in our ring, named after her as well. This ring is a cousin to our Elaina Ring, except with a generous diamond planted in the center. It's more beautiful in person. Wear our Divine ring and feel her hopeful and warm nature surge through you.

I ABSOLUTELY LOVE this ring!!!! fits perfectly and looks amazing. 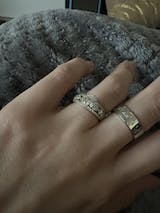 Hi Janel,
It looks stunning on you :)

I purchased this ring to wear with a solitude stone. It is perfect! I have sensitive hands from nerve issues so I'm very, very picky about how a ring feels on my fingers. I was worried that this ring would be uncomfortable, but it's not at all. The first day I wore it I felt like it was slightly annoying. I just assumed I would take it off at the end of the day and start my search over for the perfect band. I totally forgot about the ring on my finger until the next morning. It hasn't bothered me since, so I've never even taken it off.
The quality is great. I've worn it for a few weeks now, and it still looks just as it did the day it arrived. I do not take good care of this ring at all and it's still perfect! Worth the price for sure!

Thank you so much for your support! <3

The size is perfect for my finger. It’s super sparkly, and so beautiful. 100% recommend

Hi Laura, We are so happy you love your ring!

Hi Ashlynn!
ty can't wait to see what else you get!