Elaina was 13 when her adoptive father passed away, leaving her alone in the world. Or so she had thought. While cleaning out supplies from old cabinets she came across a letter and ring that had her name in it. The beautiful ring happened to have word Divine etched onto its side. The letter told Elaina that she would never be alone as she had an older twin sister, Divine, who had been separated from her at birth and that she was to wait for the right time as her sister was going to be the one to come find her.

Scared of the possibility that her sister would come to her residence and give up on her after not finding her there, Elaina never left her house. When her neighbors inquired about her sudden shut in, she would only reply with "I'm waiting for my Divine." Quiet, fragile Elaina resisted and waited patiently, counting each day, each month, then eventually each year, that passed. Not long after her 18th birthday, Elaina's wait was over and her sister finally came for her. Divine was the mother figure Elaina had wanted for long and now she rejoiced.

Our Elaina Ring embodies the strength and resilience of Elaina in a replicated version of the ring Elaina owned. This ring will have you orbiting in love with it's circlet of crystals framed by two rows of CZ diamond stones that rest atop of a magnificent 14k gold vermeil or 925 sterling silver metal base. Wearing this ring will make you will feel just as calm and patient as Elaina herself was.

I ordered 2 rings that are absolutely gorgeous! Unfortunately one of them was too big. The quality is amazing and they look so pretty.

Hi Rebecca!
We are glad to hear you love them, you can always exchange for a smaller size!<3

This ring looks beautiful on the pictures but it’s absolutely STUNNING in real life. When I opened it I didn’t expect to shine so much and I loudly gasped by its beauty. Everyone absolutely loves it and I will never take it off😍 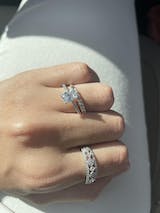 It's a beautiful ring for any kind of style. The stones are not too big or too small, so it can be stacked with nearly any kind of style. It sparkles so heavenly and perfect for every day. I ordered a size bigger because I thought the band would be thicker, and thick bands don't fit my regular ring size, but it's actually not that thick and I could have gone and ordered my regular size. Still, I get to use it on my thumb and ring finger :) Favorite rings of the website, glad to get it on the IGSTORY sale

I got this ring for Christmas and I LOVE it! The color is so gold is so bold that it is almost impossible for it to go unnoticed. Especially whenever I wear my ring with my now official Vivamacity stacked bracelets. Vivamacity, you never disappoint! Thank you Thank you Thank you!